In the News / On the Web 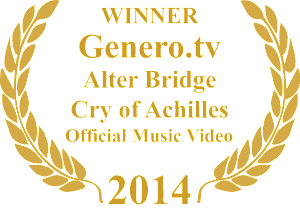 The Hardest Songs in Guitar Hero Live, as Named by Freestyle Games

An unimaginable menace threatens the peace and security of a mythical kingdom. Who or what can protect them?

Taking inspiration from the Greek legend of Achilles and set against a mythical backdrop, we set out to make a film that would hopefully match the epic themes presented in the song.

The King and Queen of a distant, mythical land are taking a romantic stroll in the forest when they come across a magnificent silver tree. Embedded in its trunk lies an exotic jewel. The King is drawn by its intoxicating power and pulls it from its resting place.

Without the jewel at the trees heart an almighty evil is unleashed. The King, under the jewels influence, mistakes his Queen for an evil demon and runs his sword through her.Distraught, he blames the demon and the forest for the loss of his beloved wife.

Over the years, the forest sends out demons of increasing size to the Kings citadel to retrieve the jewel but the King constructs his own defence, the Titan, to keep them at bay. The Titan is forged using the magical powers of the jewel and the blood of the King. For many years the Titan fights for the safety of the city and its people under command of the King. The King, knowing that he will not be able to protect his city for much longer, passes the  responsibility to his son, the Prince.

However, the Princess has to take control of the Titan after her brother fails to fight off the latest and largest demon. She is given a vision of how the war began when she comes in contact with the demon. The forest needs the jewel to be returned to its rightful place to lock away the evil spirit once more.

The King finally admits the error of his ways and offers the jewel to his daughter so that she may return it to the forest.